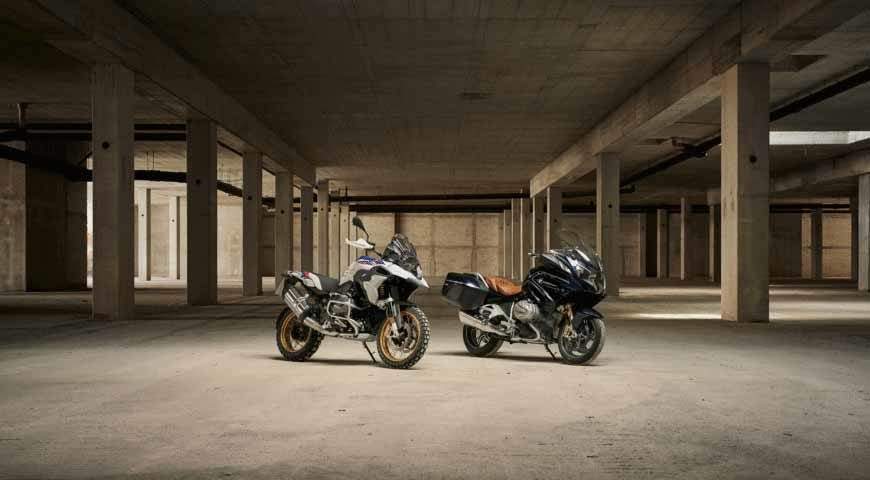 The new BMW R 1250 GS & BMW R 1250 RT have updated features. The R 1250 GS model is a completely new machine made for the adventure tourism segment, while the R 1250 RT is intended for  long distance road trips. These new models make you want to suit up and take off down the road.

The innovations begin with their new engine model based on a technology that BMW calls ShiftCam: a much more advanced boxer engine that generates increased power throughout the system, improving fuel consumption and reduced emissions. Moreover, this is topped off with smoother running that produces quite a characteristic distinct sound and improved performance at low revolutions.

The two cylinder boxer engine in BMW Motorrad models GS & RT has been a characteristically powerful and reliable propulsion system for more than 35 years, for short, average and long distance trips. More than 25 years using 4-valve technology, combined with electronic fuel injection technology and a closed circuit catalytic converter, in order to achieve the best power, efficiency and respect for the environment. That is indeed a win-win.

Other news and additional improvements

For the first time, BMW ShiftCam technology is used in the standard production of BMW Motorrad engines, which has allowed variable valve timing and valve stroke on the intake side. Another relevant change in the R 1250 GS & 1250 RT engine is in the drive of the camshaft, which is now done with a toothed chain, a better oil supply system, double jet injection valves and a new exhaust system.  This gives the new 1254 cc R 1250 engine 136 hp at 7,750 rpm and 143 Nm torque at 6,250 rpm, eclipsing the previous numbers of 125 hp and 125 Nm of torque for the R 1200 with a 1,170 cc boxer.

Both new models have a series of two driving modes for adapting the bike to the rider’s individual preferences. The ASC traction control guarantees a high degree of safety by offering the best possible traction. The HiSC slope starter assistant is also a standard feature on both models, allowing comfortable hill start. The optional Riding Modes Pro package adds dynamic driving mode and for GS, Dynamic Pro, Enduro and Enduro Pro modes as well.

Another new feature for 2019 is the standard Connectivity feature. With BMW Motorrad’s BMW Multi-Controller, the rider can access all the features of the motorcycle via Bluetooth, which is displayed on the new and bright 6.5-inch colour screen.

Intelligent emergency calling that can automatically call the emergency services in case of a block is optional. The new Dynamic Brake Control (DBC) prevents the accelerator from accelerating the bike in an emergency braking situation.

For rider comfort, the seats in the GS and RT versions of the R 1250 are adjustable, and if this proves insufficient, a range of optional seats are available from the BMW Motorrad catalogue. Likewise, both bikes include standard LED daytime running lights, while the GS model benefits from a full LED headlight.

With the optional BMW Motorrad Dynamic ESA “Next Generation” equipment, damping is automatically adapted to the situation depending on how you are riding and manoeuvring, it also automatically compensates the drive position for all load states. This function, which allows a precise adaptation of the motorbike to all driving conditions, achieves optimal damping comfort and a very stable response. It’s also now available for the BMW R 1250 RT.

With the Connected Ride standard system, the new BMW R 1250 GS includes a 6.5-inch colour TFT display. Together with the BMW Motorrad Multicontroller, the rider can access the control functions and find the best route to the destination, use a mobile phone or listen to music while riding.

All these features are on the new BMW models for next year. Prices have not yet been revealed, as well as the official arrival date at dealerships.

If you wish to receive further information, you can request it by filling out the online form, writing to us at  info@beebiker.com or by calling our office located in the heart of the city of Madrid.

If you’d rather we contacted you

Tours
Any question? Leave us a message

Advantages of travelling by motorcycle with your partner Next Post