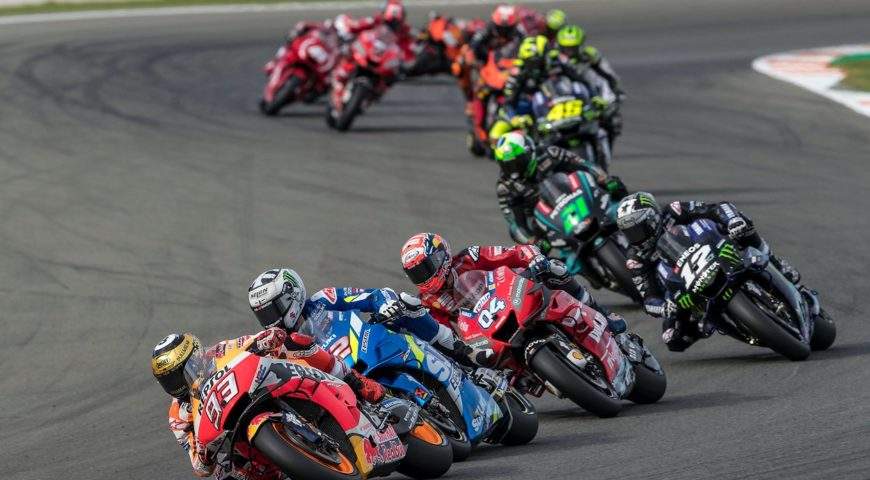 A few days after the start of the Motorcycle World Championship, on March 8, we will rev up coverage of the Moto GP world championship and the races that will be held in Spain.

MotoGP is indeed a classic, a world event that two-wheeled motor enthusiasts look forward to every year with great enthusiasm. And it is also about the history of motorcycling, since no less than 71 years have passed since the first World Cup race. A lifetime in which the motorcycle has evolved into a super powerful medium for consumers.

Spain carries important weight in the MotoGP World Cup, both at the team and rider level. We have to admit that we love motorcycles and that we do many routes throughout the year. In addition, our country is the only one in which four events are held. Without a doubt, it’s a great destination for motorcycling fans around the world, not forgetting our good weather, which makes it even more attractive..

If you are a motorcycle enthusiast, you don’t have to wait long now to again enjoy the 2020 MotoGP championship held in Spain.

A litte bit of history of the MotoGP World Cup

The Motorcycle World Championship is the oldest motorcycle race in the world. The current top division has been known as MotoGP since 2002, when the four-times era began. GP motorcycle racing is the main class of racing on road circuits approved by the International Motorcycle Federation (FIM) .

The International Motorcycling Federation, as the international governing body for motorcycle sports, in 1949 provided the opportunity to coordinate rules and regulations so that the selected events could count towards the official World Championship. Since 1949 they have been contesting various trials, several of them within what has been called MotoGP, Grand Prix. Throughout these years the categories of 125cc / Moto3, 250cc / Moto2, 500cc / MotoGP have been held and other less known categories such as those of 50cc, 80cc and 350cc have been run.

For several years the Italians prevailed in competitions with an absolute predominance of the MV Augusta house, with their racer Giacomo Agostini, who would earn 15 titles between 1966 and 1975. This Italian predominance would be followed by the Japanese, with the emergence of brands Yamaha, Honda and Suzuki, which until today have been the absolute leaders in the top competition of the championship.

And who currently dominates the motorcycle landscape?

Currently, the undisputed winner of recent years is the Catalan Marc Marquez who with the Honda brand has achieved six MotoGP podiums in seven years (between 2013 and 2019). A top record.

In 2013 Marc Marquez became the first Rookie to win at the Laguna Seca circuit, being also the last GP held on that circuit.

MotoGP 2020 Calendar in Spain and the world

This year the calendar of the Motorcycle World Championship is extended with a new race, the Finnish Grand Prix, which will be held at the KymiRing circuit.

Apart from this novelty, the four classic routes are still being kept in Spain: Jerez, Montmeló, Aragón and Cheste. We are the luckiest country, with four renowned circuits.

The World Cup begins on March 8 in Losail, Qatar and it will not be until May 3 that we see it in our country, at the first appointment of the Grand Prix of Spain, in the Circuit of Jerez. In the city of Cadiz, the most crowded of competitions, during the three days of racing, more than 200,000 spectators gather. A highly anticipated date for all the bikers in the world, especially Europeans.

On June 7, the Grand Prix of Catalonia is celebrated in Montmeló, about 30 kilometres from Barcelona. In this city a large number of motorcycle fans get together. After Rome, Barcelona is the European city with the most motorcycles. Not surprisingly, Catalonia has seen great motorcycling turnouts.

The next Grand Prix will be held in Aragon on October 4, 2020. The Aragon Motorcycle Grand Prix is a speed race held at the Motorland Aragón de Alcañiz circuit in Teruel. It has been held since 2010 and is another great opportunity to see a World Cup motorcycle race close up.

The World Cup tests end on November 15 in our country with those of the Valencia circuit, Ricardo Tormo de Cheste. A final touch for the championship in a coastal town 28 kilometres from the Valencian capital, ideal for spending a few days on motorbikes and doing some tourism on the shores of the Mediterranean.

Its reduced distance of 4 km makes it one of the smallest tracks on the calendar. Despite this, the last race status makes the title very contested, resulting in very fast and exciting races.

Here are listed all the dates and circuits of the World Cup:

In the face of the new season of the MotoGP 2020 World Championship, some new features have been included in various aspects.

The new regulation allows teams to have riders without a contract, in addition to official riders, so they can test the bikes. So more people can test and send more information to the engineering teams.

Manufacturers may have up to a maximum of 6 Wild Cards per season and may attend consecutively the various major prizes that make up the calendar year.

Although it only affects the lower categories (Moto3 and Moto2), this year, the procedure for this type of departure will be different: if the race is delayed, even if it has not started, two thirds of the scheduled laps will be reduced.

The main change in the regulation is related to the aerodynamic aspect, which will have much stricter standards to equalize manufacturers a little more and that there are not so many differences from one another.

This 2020 is much more linked to the “Aero Body” rule, which only allows the fairing to be modified once a season, only the wings integrated into the fairing being legal.

These are small changes to the rules of the World Motorcycling events going along with the new times.

If you wish to receive further information, you can request it by filling out the online form, writing to us at  info@beebiker.com or by calling our office located in the heart of the city of Madrid.

If you’d rather we contacted you

Tours
Any question? Leave us a message

11 reasons to rent a motorcycle in Spain Next Post